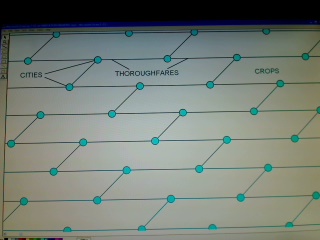 "...it is an extrapolation of the dotted bit of the drawing..."

the thoroughfares will be for walking only

there wont be a need for transporting heavy items

each individual building will be self sufficient in food, water, clothing, energy etc.

(being pushed or pulled)

(the number of cells in the brain)

both embassies have been approached

neither of them will acknowledge the writers existence publicly

by not acknowledging the writers existence they are erasing yours

(genetic theory only applies to the living)

you try talking to them

they wont talk to me

up until then all questions had been answered in pictures, sentences, words and a couple of other ways

it took him completely by surprise, staggered would be nearer the mark, when this moving sequence filled his conscious, containing, as it did, a raw energy that isn't going to be easy to convey in words

(imagine the most vivid movement you can recall from a dream and then imagine that happening when you were wide awake or try imagining nuclear energy with shape, thought and purpose)

the writer played it over and over again in his minds eye for the next three days when, to his disappointment, it started to lose its energy

that's when the problem started

specifically, it wasn't possible to tell precisely what the angle of the line of the thoroughfare was

even now there is room for variation

it is assumed that when we get into marrying all the facts a technical or resource or... will deliver the sought after detail

one feature that the new habitation will have, where circumstances or conditions suggest it, will be vacuum walls

(the same as in vacuum flasks)

back to index page